You can read all over the internet that it’s important to put your hard drives into their original slots, e. g. when you migrate to a new Synology device, or when you need to remove the drives to add memory.

This is simply not true.

As expected DSM, which is a flavor of “Linux,” will automatically discover your physical partitions based on the GUIDs each partition has, and then reassemble your volumes. I just tested this (i. e. intentionally put the drives into the device in the wrong order) with a JBOD volume, and I had no issues whatsoever. I cannot see why this should be different with SHR or RAID-5, for example.

If you have also tested this, please let me know how it went for you.

I had to erase an external hard drive, a WD My Book, because I had to return it due to defects. So I searched on the web how to do that on a Synology DS916+ NAS, but I could not easily find the solution. Therefore I did a more generic search how to do it under Linux, and came across the tool “shred” which I had used years ago for the last time.

I checked on my NAS, and the tool was readily available. So I ran the following command to securely erase the (external) hard drive:

Hope this helps people who need to accomplish the same. 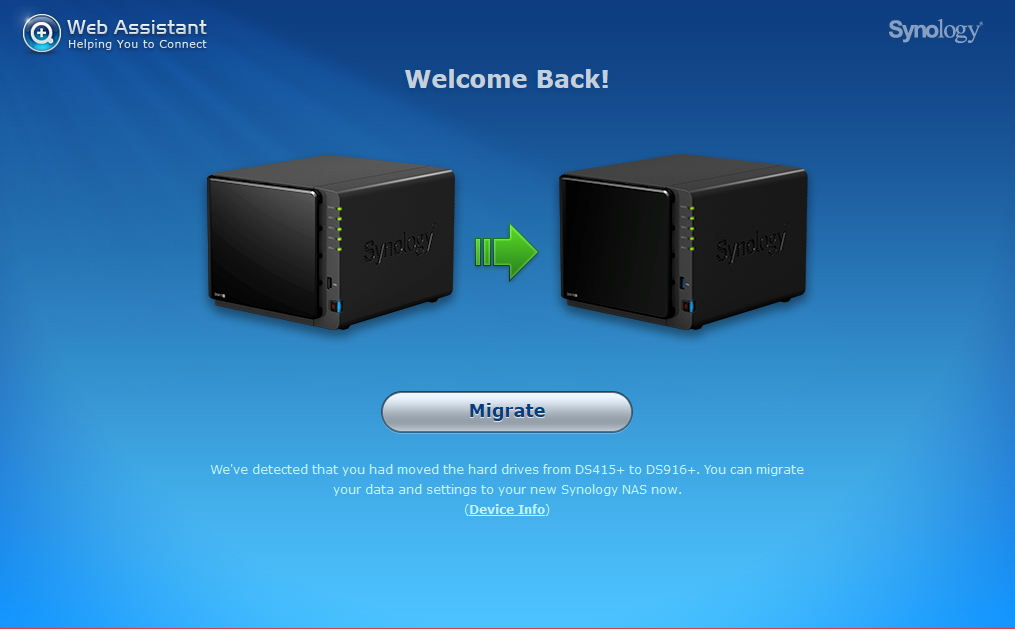 END_OF_DOCUMENT_TOKEN_TO_BE_REPLACED

Since about half a year I’m struggling with a very annoying bug in Synology’s “Cloud Sync” package I’m running on my expensive Synology DiskStation DS415+ NAS. It is still present as of today’s DSM 6.0.2-8451 Update 2.

I would like to backup my photos to my Amazon Drive/CloudDrive. As an Amazon Prime customer I can store an unlimited number of images, and only images — other files, like *.xmp sidecar files, will count against my general 5 GB limit.

The problem is that Synology’s Cloud Sync will upload the sidecar files, even though I explicitly only select “Images” to be backed up (and *.xmp is not part of Images, as I will show you!). END_OF_DOCUMENT_TOKEN_TO_BE_REPLACED

Even on the latest 5.1-5021 version of Synology‘s DSM I couldn’t get my Terratec Cinergy Hybrid XE working on my Synology NAS — the corresponding kernel module tm6000 would always generate a general protection fault on my DS414.

Today I upgraded to a DS415+ (with a completely different CPU), and the module still crashes.

So it seems it’s a real bug in the driver, not just a defect on a single platform (which can happen e. g. due to compiler bugs).

Unfortunately Synology seem not very interested in this kind of problems. I repeatedly reported this issue, but all they replied is “Thanks for your report, we’re looking into this.” Even in the latest DSM release 5.2 the issue is still present.

Since a while I own a new Synology NAS, a DiskStation DS414. Synology advertizes this model with speeds of

However I never came even close to those speeds in my daily use of the DiskStation, so I tried to set up an ideal scenario in which I would get the fastest speed the NAS could deliver.

I did so by using a very fast client (a MacBook Pro Retina with a 2.5 GHz Core i7 CPU and SSD drive), and connected that directly “back-to-back” (i. e. without any network device in-between that could potentially slow the network traffic down) to one of the networking ports of the NAS.

I then copied about 25 GB of large files (movies) between the Mac and the NAS.

The fastest speeds I could get was a meager 79.5 MByte/s on reads, and 39.4 MByte/s on writes. That was extremely disappointing, but it confirmed my subjective feeling that the NAS is slow.

To confirm the read data rates I executed the following command directly on the NAS, to have a means of a “plausibility check:”

This shows that the NAS is capable of reading at a higher speed than it could deliver to the client via the network — possibly an issue with the CPU being too weak to deliver the full speed Synology promise?

Anyway, I find these disappointing results inacceptable, and it makes Synology’s statement a “lie.” Also, I found severe instability and defects with respect to the VideoStation package and recording from a DVB-T stick. Plus the massive issues Synology have with the power-saving “Hibernation” feature that never worked for me (neither on this box, nor on its predecessor DS212+.) And I’m not alone, a lot of people have the same issue, but Synology seem unable to solve it.

Considering the high price of the NAS (almost 400 EUR!), my strong opinion is that the device simply is not worth its money. It would have been better to buy a HP ProLiant MicroServer and get more power for less money. 🙁